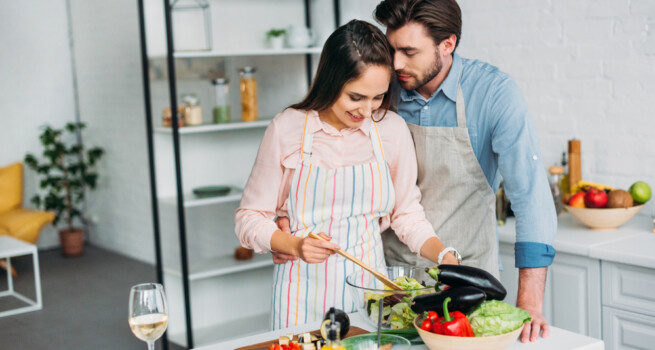 It does seem like going vegan is all the rage right now. So I can’t say I was surprised when my boyfriend went vegan.

He’s always tried to have a healthy diet, and he believes that going animal-free is better not only for people but for the planet. I support his decision, but now I am obsessed with making a vegan meal for my boyfriend.

I want to win his heart over again! As they say, the best way to a man’s heart is through his stomach. He used to be a meat-lover, and I can understand how it may be hard to go meatless.

So, I’ve been doing my research to develop some vegan recipes that I think he will love. These recipes have all the flavors of meat dishes but without the meat. They also pack a hefty dose of protein, fiber, and veggies. They even had my mouth watering as I was preparing them.

This may seem like a challenge, but it’s not! It’s easy to make, and it looks fantastic when it’s finished. The onions, eggplants, and zucchini make it incredibly tasty. It can be used as a side dish or the main course.

Risotto With Summer Squash and Mushroom

Risotto is so incredibly delicious. It’s smooth and creamy and still tastes like it is covered in butter or cheese- even when it’s vegan. This recipe also doesn’t have much fat in it, so it’s also great if you are trying to watch what you eat.

A little patience is needed when stirring the rice, but the entire meal can be done in under 45 minutes.

Eggplant Parmesan is classic in almost every cookbook. It’s naturally meat-free and can easily be made dairy-free with this recipe. You can also top it off with nondairy cheese, and if you want to go gluten-free, use gluten-free breadcrumbs.

The vegan version of fettuccine alfredo can be just as delicious as the dairy version. Using sauteed mushrooms and pasta, this is an easy go-to meal. You can also easily use gluten-free pasta if you are trying to avoid gluten as well.

My boyfriend likes sushi, and it’s been one of the hardest things for him to give up. I wanted to make him homemade sushi, and I was lucky enough to find this recipe.

It’s beautiful when done and presented on the plate, and he has truly enjoyed it.

Cauliflower is such a versatile veggie. It can be used in so many different ways! I found this recipe for roasted cauliflower, featuring lots of lemon and garlic white wine sauce. It’s put together in less than 30 minutes and can easily be a side dish or the main course.

I genuinely hope these recipes are helpful. I have made them all, and I can honestly say they have been a hit. Paired with some wine and a night by the fireplace, these recipes were made for romance.